Yesterday Stephen Hawking left planet Earth, where, arguably, his mind spent very little time anyway. For reasons known only to the committee in charge, he never received a Nobel Prize, although he may easily have deserved two: one for the sciences and another for peace – perhaps even a third for literature, since Alfred Nobel did not think, apparently, of the importance of teaching and the popularization of science. 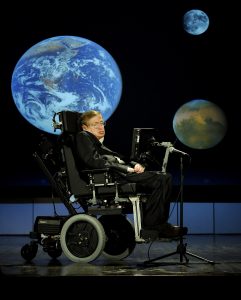 Prizes or not, Hawking by all means was the best known living scientist, no less popular than the great Albert in his time. His character strength managed to remain victorious over his feeble body, an example par excellence for the power of “mind over body”, turning him not only into a role model for the ill and suffering but also giving hope and strength to those who felt and feel crushed under the burdens of daily life and their own aspirations: if a man with such a crippling disease manages to keep up, to keep himself going without loosing his good humor, even considering himself happy, then we can also go on. We can live on, work on, fight on for what we consider important and right.

While the Astrophysicists science remained – and always will remain – largely obscure for most people without a background in the field, he nonetheless was able to convey the fascination and deep queerness of the rather peculiar universe we live in to lay people and even interested youth (yours truly was one of them). I attribute his clarity in writing to his disease. Writing is difficult when you can only use a finger, later merely an eyelid, to select words and individual characters, so words become precious and are not wasted. It probably led him to develop his straight to the point writing style of shining bright clarity even when it comes to the most esoteric of topics. 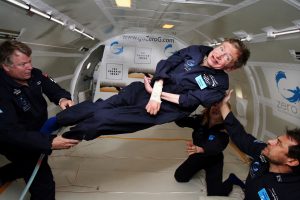 A passion for Gravity in every respect: Despite his ailments Hawking playfully explores “Zero G” parabola flight.

Despite being good humored, as can also be seen from his regular participation in popular TV comedy shows like the cult nerd sitcom „Big Bang Theory“ and the Simpsons as well as the science fiction series „Star Trek – the Next Generation“, he also had what some consider a misanthropic and excentrically pessimistic side, while most of his peers in the sciences take his dire warnings very seriously. Hawking was one of the voices in the wild, warning against imminent self destruction of the human species. Being one of the most eminent thinkers of our time, he was acutely aware of the systemic thresholds we are rapidly approaching and that amount to nothing less than points of no return on our civilatory „Blind Flight“ into the future. In contrast to the general public as well as many of single minded captains of industry and politics he understood the scientific background of geo systems processes that led one of the greatest figures of the field – Jim Hansen – to coin the term „anthropocene“. Hawking picked up Hansen’s trailblazing work on planetary atmospheres and his scientific analysis of the „Venus Effect“ as early as the 70s and 80s. Ever since Hawking has been one of the most outspoken and also most listened to warners against the risk – and indeed very real possibility – of a complete systemic meltdown of the Earth’s biosphere, leaving nothing but a hot dead rock at the end of a systemic stampede called „runaway greenhouse“. And that is only one of many systemic global catastrophic risks of our own design.

Hawking will be much missed, both, as a scientist as well as a moral authority. His scientific, moral and life teachings and contributions will be much missed, and, after all, there still might be time to listen to him, despite his dire warnings and pessimistic outlook that led him to suggest we should migrate to space as soon as possible in order to save our species.

Personally I am happy for Stephen Hawking that he still saw the discovery of gravitational waves, for which his friend and colleagues Kip Thorne, Rainer Weiss and Barry Barish received the Nobel Prize in 2016 – a breakthrough discovery for which Hawking prepared the stage. In any case: Well done Professor!